We will not be having an outdoor gathering this Sunday, July 5th!

For a guide to lead you in our Sabbath weekend, head HERE!

8 Ways We Flatter Ourselves 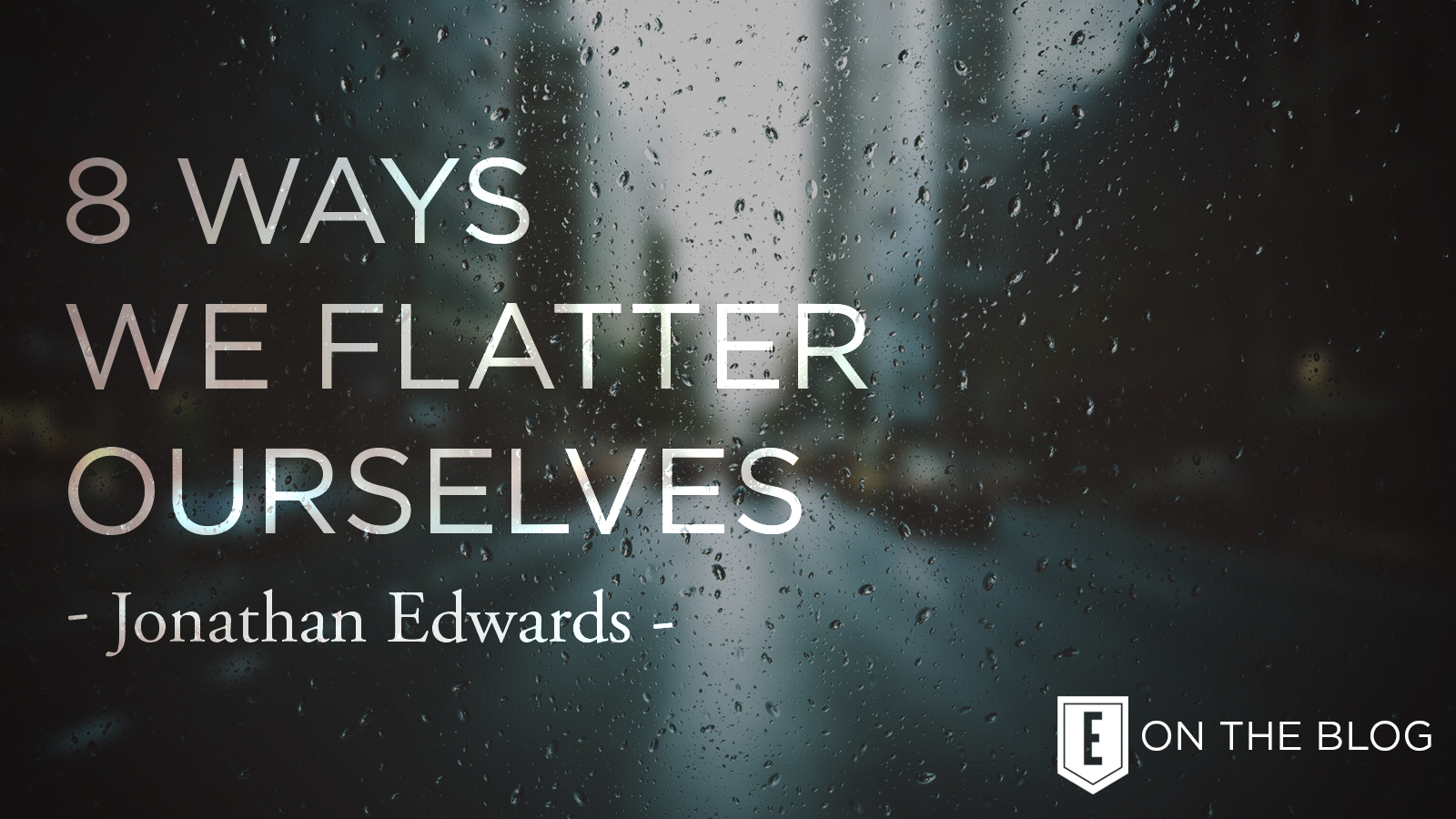 This past Sunday we spent some time looking at Psalm 36 and focused on how a person flatters himself in his own eyes. During the message we discussed Jonathan Edwards 8 ways in which sinners flatter themselves in their own eyes. We have included those for you to reflect on.

1. Some flatter themselves with a secret hope, that there is no such thing as another world. They hear a great deal of preaching, and a great deal of talk about hell, and about the eternal judgment; but those things do not seem to them to be real. They never saw any thing of them; they never saw hell, never saw the devils and damned spirits; and therefore are ready to say with themselves, How do I know that there is any such thing as another world? When the beasts die, there is an end of them, and how do I know but that it will be so with me? Perhaps all these things are nothing but the inventions of men, nothing but cunningly devised fables.

Such thoughts are apt to rise in the minds of sinners, and the devil sets in to enforce them. Such thoughts are an ease to them; therefore they wish they were true, and that makes them the more ready to think that they are indeed true. So that they are hardened in the way of sin, by infidelity and atheistical thoughts. Psalm xiv. 1. " The fool hath said in his heart, There is no God." Psalm xciv. 6, 7. "They slay the widow and the stranger, and murder the fatherless. Yet they say, the Lord shall not see; neither shall the God of Jacob regard it,"

2. Some flatter themselves that death is a great way off, and that they shall hereafter have much opportunity to seek salvation; and they think if they earnestly seek it, though it be a great while hence, they shall obtain. Although they see no reason to conclude that they shall live long, and perhaps they do not positively conclude that they shall; yet it doth not come into their minds that their lives are really uncertain, and that it is doubtful whether they will live another year. Such a thought as this doth not take any hold of them. And although they do not absolutely determine that they shall live to old age or to middle age, yet they secretly flatter themselves with such an imagination. They are disposed to believe so, and do so far believe it, that they act upon it and run the venture of it.

Men will believe that things will be as they choose to have them, without reason, and sometimes without the appearance of reason, as is most apparent in this case, Psalm xlix. 11. "Their inward thought is, that their houses shall continue for ever, and their dwelling places to all generations; they call their lands after their own names."

The prepossession and desire of men to have it so, is the principal thing that makes them believe so. However, there are several other things which they use as arguments to flatter themselves. Perhaps they think with themselves, that since they are at present in health, or in youth, or that since they are useful men, do a great deal of good, and both them selves and others pray for the continuance of their lives; they are not likely to be removed by death very soon.

3. Some flatter themselves that they lead moral and orderly lives, and therefore think that they shall not be damned. They think with themselves that they live not in any vice, that they take care to wrong no man, are just and honest dealers, that they are not addicted to hard drinking, or to uncleanness, or to bad language; that they keep the Sabbath strictly, are constant attendants on the public worship, and maintain the worship of God in their families. Therefore they hope that God will not cast them into hell. They see not why God should be so angry with them as that would imply, seeing they are so orderly and regular in their walk; they see not that they have done enough to anger him to that degree. And if they have angered him, they imagine they have also done a great deal to pacify him.

If they be not as yet converted, and it be necessary that they should experience any other conversion in order to their salvation, they hope that their orderly and strict lives will move God to give them converting grace. They hope that surely God will not see those that live as they do go to hell. Thus they flatter themselves, as those we read of. Luke xviii. 9. "That trusted in themselves that they were righteous."

4. Some make the advantages under which they live an occasion of self flattery. They flatter themselves, because they live in a place where the gospel is powerfully preached and among a religious people, where many have been converted; and they think it will be much easier for them to be saved on that account. Thus they abuse the grace of God to their destruction; they do that which the scriptures call despising the riches of God's goodness: Romans ii. 4. "Or despisest thou the riches of his goodness, and forbearance, and long suffering; not knowing that the goodness of God leadeth thee to repentance?"

Some flatter themselves, because they are born of godly parents, who are dear to God, who have often and earnestly prayed for them, they hope that their prayers will be heard; and that encourages them to go on in the way of neglecting their souls. The Jews had great dependence upon this, that they were the children of Abraham: John viii. 33. they make their boast. "We be Abraham's seed; and in verse 39. "Abraham is our father."

5. Some flatter themselves with their own intentions. They intend to neglect themselves, and give themselves liberty for a while longer, and then to reform. Though now they neglect their souls, and are going on in sin; yet they intend ere long to bestir themselves, to leave off their sins, and to set themselves to seek God. They hear that there is great encouragement for those who earnestly seek God, that they shall find him. So they intend to do; they propose to seek with a great deal of earnestness. They are told, that there are many who seek to enter the kingdom of heaven, who shall not be able; but they intend, not only to seek, but To STRIVE However, for the present they allow themselves in their ease, sloth, and pleasure, minding only earthly things.

Or if they should be seized with some mortal distemper, and should draw near to the grave, before the time which they lay out in their minds for reformation, they think how earnestly they would pray and cry to God for mercy; and as they hear God is a merciful God, who taketh no delight in the death of sinners, they hence flatter themselves that they shall move God to have pity on them.

There are but few who are sinners, and know themselves to be such, who do not encourage themselves with intentions of future repentance and reformation; but few who do not flatter themselves, that they shall in good earnest set themselves to seek God some time or other. Hell is full of GOOD INTENDERS who never proved to be TRUE PERFORMERS: Acts xxiv. 25. "Go thy way for this time; when I have a convenient season, I will call for thee."

6. There are some who flatter themselves, that they do and have done, a great deal for their salvation, and therefore hope they shall obtain, when indeed they neither do what they ought to do, nor what they might do in their present state of unregeneracy; nor are they in any likely way to be converted They think they are striving, when they neglect many moral and some instituted duties; nor do they exert themselves as if it were for their lives; they are not violent for the kingdom of leaven.

There are doubtless many such; many are concerned, and are seeking, and do many things, and think that they are in a very fair way to obtain the kingdom of God; yet there is great danger that thy will prove at last to be some of the foolish virgins, and be found without oil in their vessels.

7. Some hope by their strivings to obtain salvation of themselves. They have a secret imagination, that they shall, by degrees, work in themselves sorrow and repentance of sin, and love towards God and Jesus Christ. Their striving is not so much an earnest seeking to God, as a striving to do them selves that which is the work of God. Many who are now seeking have this imagination, and labor, reach, pray, hear sermons and go to private meetings, with the view of making themselves holy, and of working in themselves holy affections.

Many, who only project and design to turn to God hereafter, are apt to think that it is an easy thing to be converted, that it is a thing which will be in their own power at any time, when they shall earnestly set themselves to it.

8. Some sinners flatter themselves that they are already converted. They sit down and rest in a false hope, persuading themselves that all their sins are pardoned; that God loves them; that they shall go to heaven when they die; and that they need trouble themselves no more: Revelation iii. 17. "Because thou sayest, I am rich, and increased with goods, and have need of nothing; and knowest not that thou art wretched, and miserable, and poor, and blind, and naked."

8 Ways We Flatter Ourselves

A Vision For Gospel Saturation